As the last days of summer eased into the fall, I got to spend a few days at Punty’s Palace in western Maine. Out of the 4 days, I had 2 rainy days, and 2 beautiful days of warm sunshine. One of the annual chores is to begin cleaning up around the cabin in preparation for winter.

I discovered, to my disappointment and disgust, that somebody had left a cooler full of beer on the deck for an entire year, right through the brutal winter and the whole summer. Coincidentally, the cooler looked a lot like my cooler which someone had stolen about a year ago. I opened it up and was greeted with the waft of stale beer and brackish water. The thought of drinking the beer off came and went pretty quickly, but I’d be lying if I said it never crossed my mind.

Well, I needed the cooler for an upcoming camping trip, so I had to clean it out.. But what to do with all those cans of beer and tonic? While drinking it was not a viable option, with the nearest hospital being 2 hours away, and no working telephone signal for miles, it’s always a sin to waste beer, skunked or not.  Time for a game of Beerhunter!

First thing’s first, so I busted out my Gamo .22 caliber pellet gun.

I hadn’t shot it in awhile, so I had to give it a few test shots to see if the scope was still in alignment. I took 4 shots at my homemade target and the scope was dead on! That one to the left was me, not the rifle.

She was ready to go!  I emptied the cooler, rinsed and scrubbed it, and took the contents of the cooler and set them up in my chosen hunting ground. 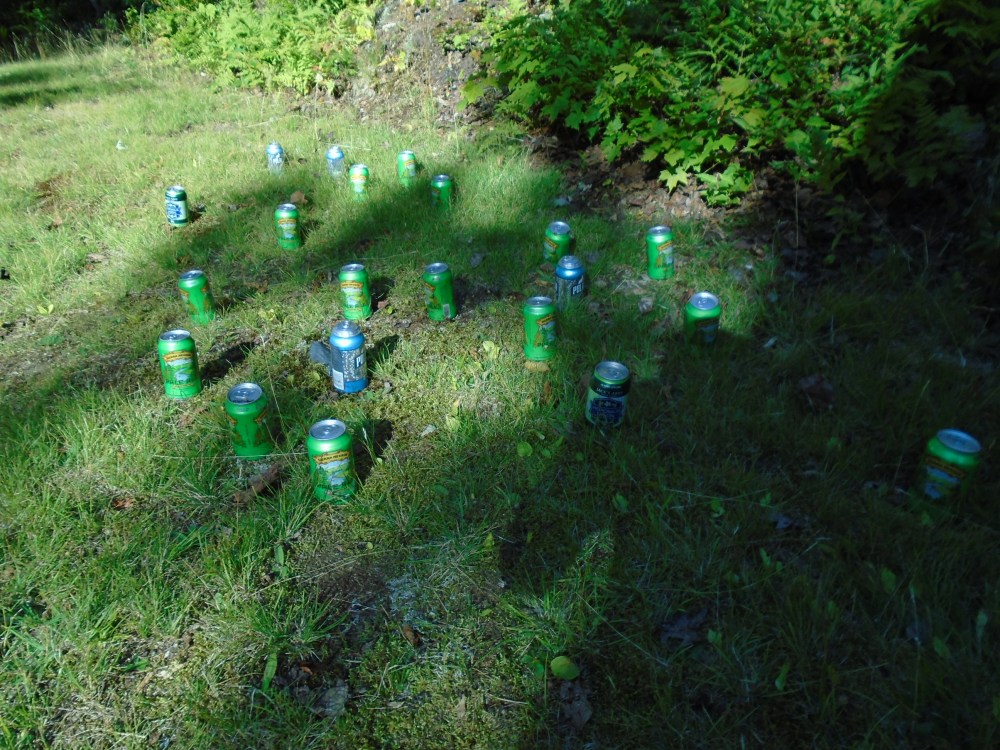 Next, I took my place in my hunting perch and prepared for battle.

It wasn’t as close as that picture makes it look, but close enough to make for some easy shooting. 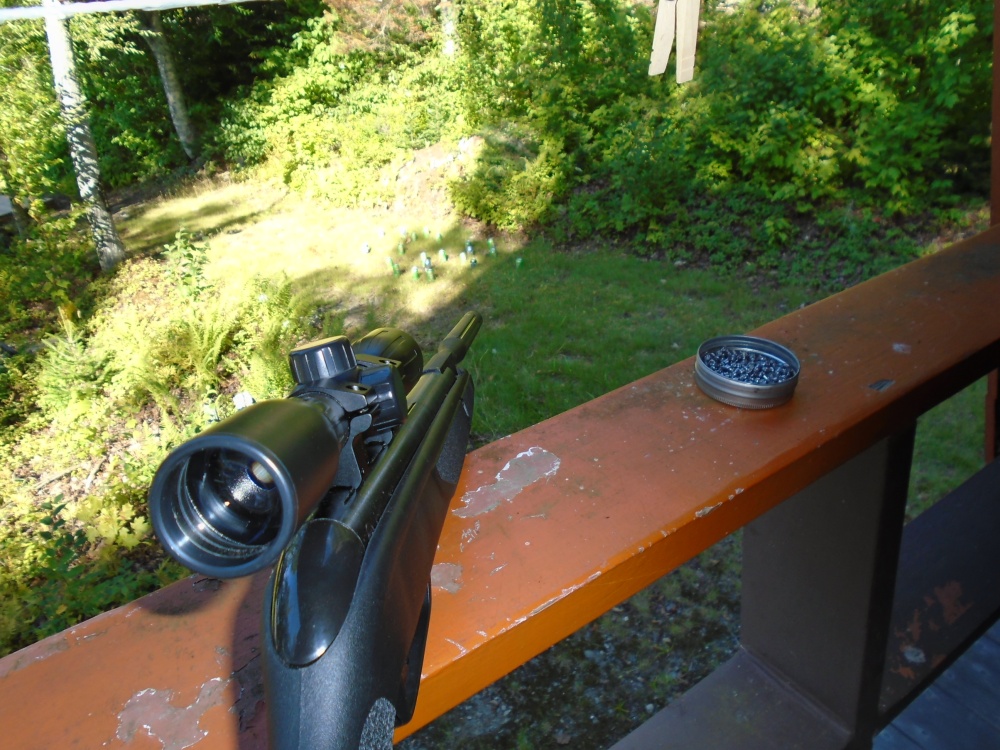 And the massacre began! The tonic water was disappointing. They were apparently DOA, no fizz, no pop at all. The pellets went right through them, making clean .22 inch sized holes. The Sierra Nevada’s, however, were booming, popping, rupturing, and spraying their contents all over the grass! 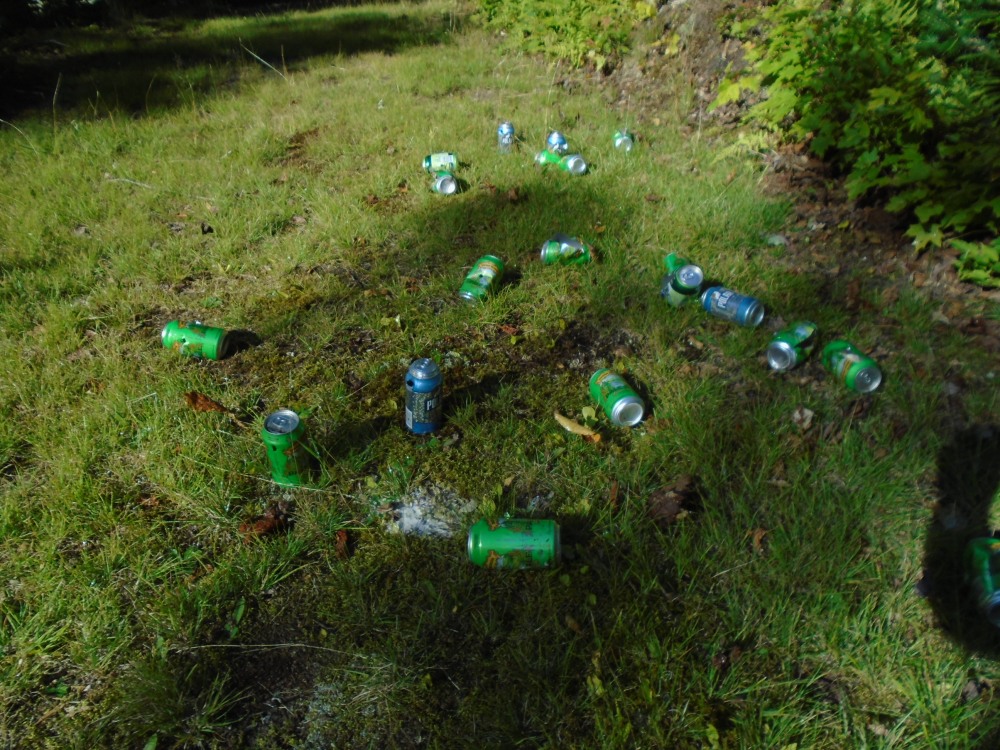 Alas, it was over all too quickly. So, I trudged down to the range for cleanup. Fortunately, I had my pellet gun in my hand just in case I had to deliver a Coup de Gras to any of them. Why fortunately? Well, because as I was doing cleanup, I spotted a very strange, otherworldly creature that had wandered out from the deep forest to spy on me.

What the Hell? Where did he come from? There’s nobody here but me for a mile around! I wasn’t exactly scared, mind you, but just in case, I grabbed the Gamo and took my shot. MISSED! Another shot, another miss! OH NO! The little bastard was just sitting there mocking me, unafraid. I loaded up and took another shot, and BAM! I blasted that little bugger right back into the woods where he came from, his guts flying everywhere. I nailed him, right in the noggin, leaving just a small, fractured peice of him in amongst the old stump he was perched on….see that tiny little pink piece of him, there? The rest of him was blown right back into the forest.

That job done, I returned to my task of cleaning up the beer casualties, when I heard a rustle in the leaves of the forest floor behind me. I turned to see what it was, thinking it was just Chippy the resident chipmunk, but no, it was more of them!

I grabbed Mr. Gamo and loaded up, and began firing as fast as I could, all the while thinking that this must be what Bunker Hill was like, as the colonists had to go throught the agonizingly slow process of muzzleloading their muskets while the British inexorably marched up the hill creeping ever closer, ready to drive a bayonette through the upstart rebels!

I shot, and shot…a miss, a hit, a miss….luckily, these lollypop critters are slow, so I had time to get off plenty of shots, despite the fact that I had a single shot break barrel rifle.

Some of them I chopped their scrawny bodies in half, and their heads went spinning off into the woods, others I watched as their heads exploded like fireworks spraying colorful shrapnel everywhere! My adrenaline was going and my heart was thundering in my chest as I unloaded shot after shot into the advancing rank.

Finally, I got every one of them except for one, who finally lost his courage and retreated back to the deep, dark forest, abandoning the remains of his buddies, some of whom were left standing headless and upright, others having been blasted several feet from where they were standing, their shattered lollypop heads scattered over the forest floor.

Once I had finished them off, I did a quick tactical recon, swivelling my head to and fro in a manner that would make Joe Teti proud! AHA! Another wave of lollypop monsters, having learned from their predecessors mistake, were sneaking up behind me, using an old log as cover! I jumped to my feet, running at full speed to flank them. I reached my flank position as they struggled to take cover on the far side of the log. 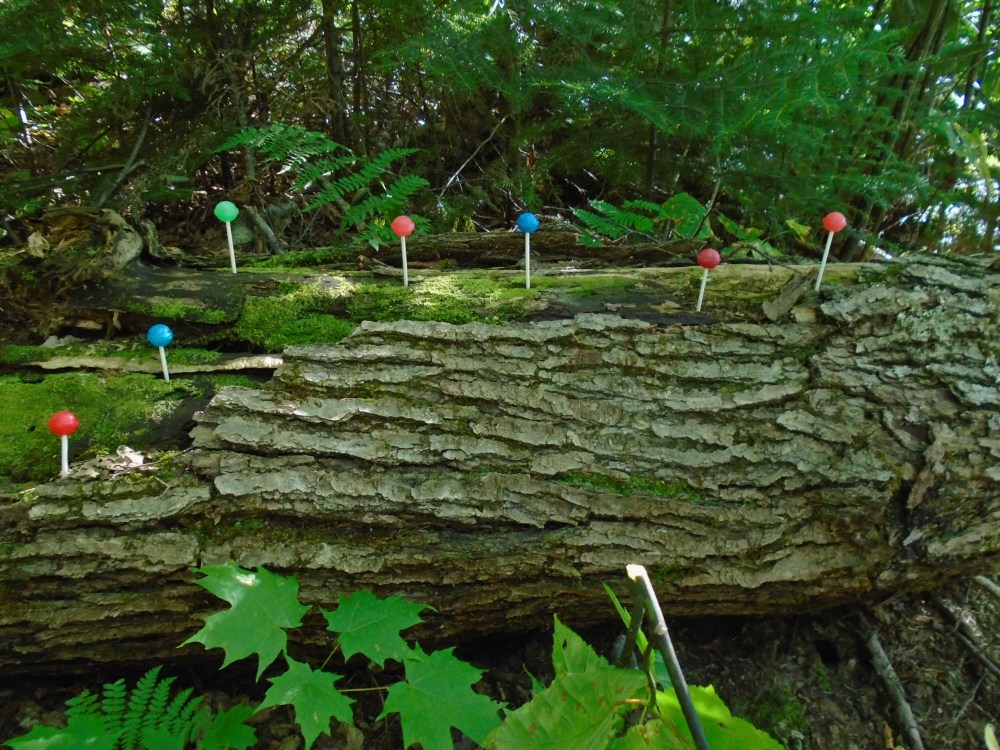 With my back against an old birch tree, I took my position and began shooting. I missed! Too low! My range was too close. I aimed above the target, and took another shot, BOOM! Exploding shards of lollypop skull told me I had guessed right. Still, I did cut the legs from one or two, as I was guessing about the elevation on my shots.

In short order, I dispatched the wily creatures. 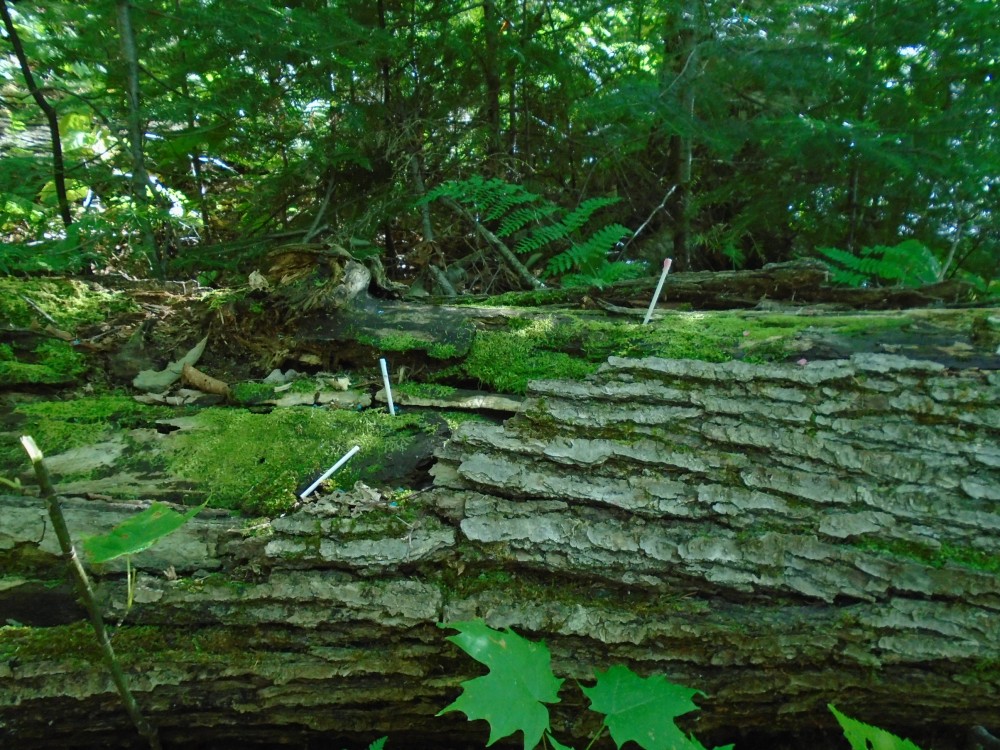 That’ll show them not mess with me!

Just to be sure, I scanned the woods to see if there were any more of the malevolent critters trying to senak up on me, and inspected the battlefield. It was gruesome, indeed…multi colored shattered heads and stick bodies scattered everywhere. 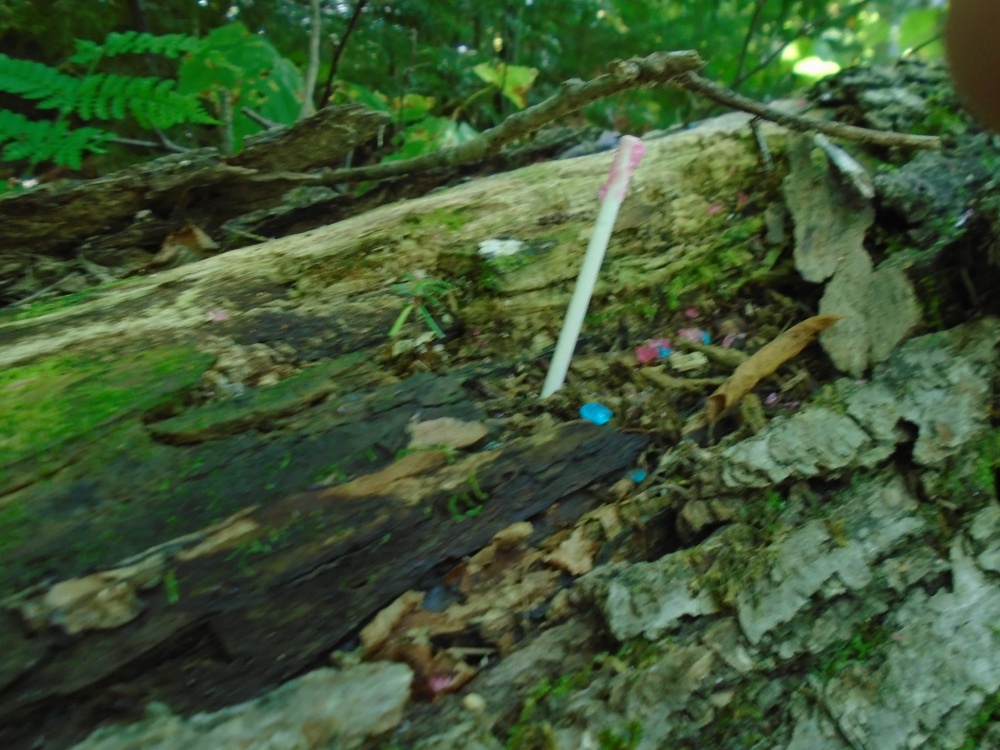 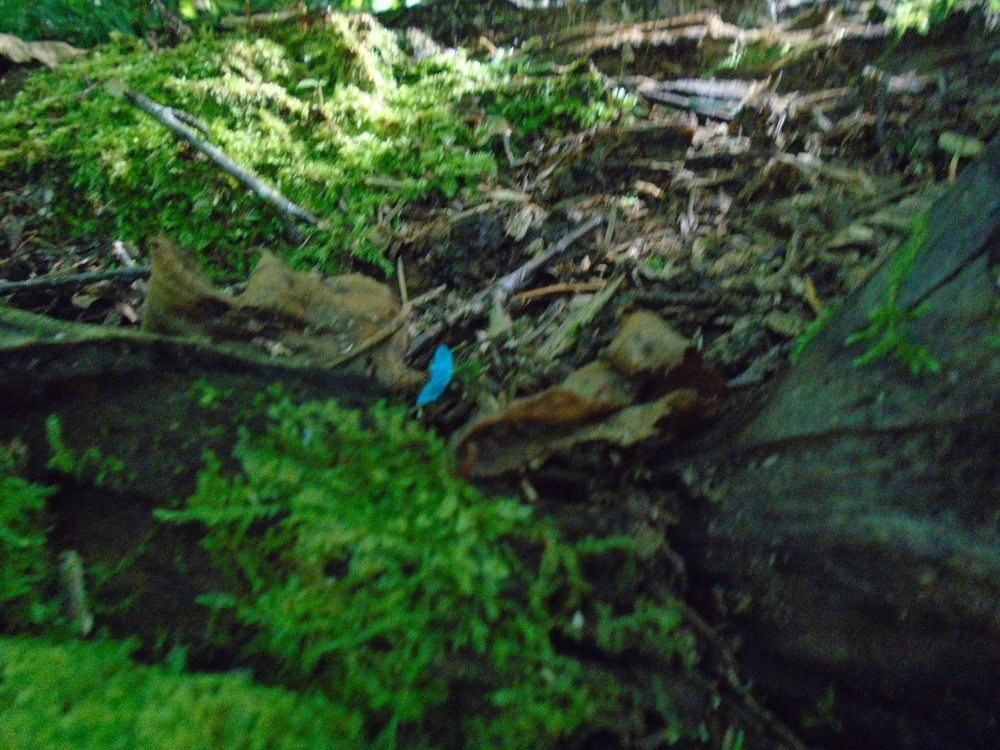 With that, I gathered up my ammo, and went back into my cabin, closed and locked the doors and windows, keeping the mighty Gamo close at hand just in case, but the rest of my weekend was uneventful, no more lollypop ambushes occurred for the final two days of my vacation. I guess they learned their lesson, that Punty was not a man to be trifled with.

I just hope that any other campers nearby did not fall victim to the roaming evil, but hey…that’s not my problem. That’s their problem. Me? I am the victor today! I survived the Lollypocalypse!